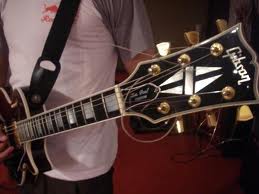 Sometimes I am so focused on the gear I don’t have that I can overlook the gear I do, and what the point of even having gear is – to make music. I was reminded again of this when listening to a demo I made with my old band Corban Ablaze. We had a few originals that we were really happy with and wanted to make some basic recordings of them. I didn’t have a Zoom recorder or anything decent enough to sit in a room to capture a jam, and none of us had enough cash to hire a studio for a day or 2. So in the end, we just went to down to church where there was a nice drum kit and a mixing console and a bunch of Sure SM58’s. The mixing desk was connected to a PC running Audacity (which is FREE, God bless open-source), so we tracked everything one at a time onto separate tracks on Audacity.

First we mic’d up the drums with four SM58’s: 1 between hats and snare, 1 between the 2 rack toms, 1 on the floor tom, and 1 on the kick drum. The tom mic’s picked up the cymbals just fine. Even though a 58 on a kick drum is far from optimal (imagine the opposite of a clear, deep, thumping bass sound) – it’s all I had available! So we played out the song over again until we got a good continuous drum track. A single track with all the drums mixed  to approximate levels. Not something to make a studio tech smile, but we were determined to the best we could.

Next we did bass, then 2 guitar tracks (for left and right panning), then keyboard tracks. After playing this song over for at least an hour, we moved on to 2 others. Same again with the single tracking. Shure 58’s all round.

Then when I got home, I imported all the separate wave files into Garage Band on my laptop. Why the choice of Garage Band and not ProTools or Cubase or the like? Because it’s FREE!!! And good.

Then later at night, I went back down to church to record vocals. I had a rough mix from the laptop in my headphones and laid some tracks down the same way, 58 to mixing desk, to Audacity. Funny to think Im recording vocals through the same mic I recorded the kick drum with earlier that day. Oh well.

Then over the next few weeks, as I made pockets of time available, I was able to use as much processing trickery I knew how to extract as much sonic goodness as possible within Garage Band. Some techniques I used:

One thing I will point out is that the instruments we used are all very nice- Gibson Les Paul Custom through Laney VH100R, Mapex Venus (Remo Pinstripes all over), Sabian and Zildjian A & K custom cymbals, Peavey Soundgear SR1200 bass, and some half-decent Yamaha keyboard. This really helped with maintaining some kind of quality in the tones.

So the point to this post is to encourage anyone who is feeling too broke or lacking in gear to record anything. Think about what you DO have and what your friends already have. What does the guy down the road have? Can you invite a friend of a friend around for a beer and see if they could lend or operate their gear for you?

Try not to let gear and money worries cloud your creative process. I always tell myself that I can record it again one day when Im rich and successful. It helps take off the pressure and get some music into reality. And please – learn something new and have some fun while doing it!!!

So here’s the track that came up best-

4 thoughts on “Use Whats Available”